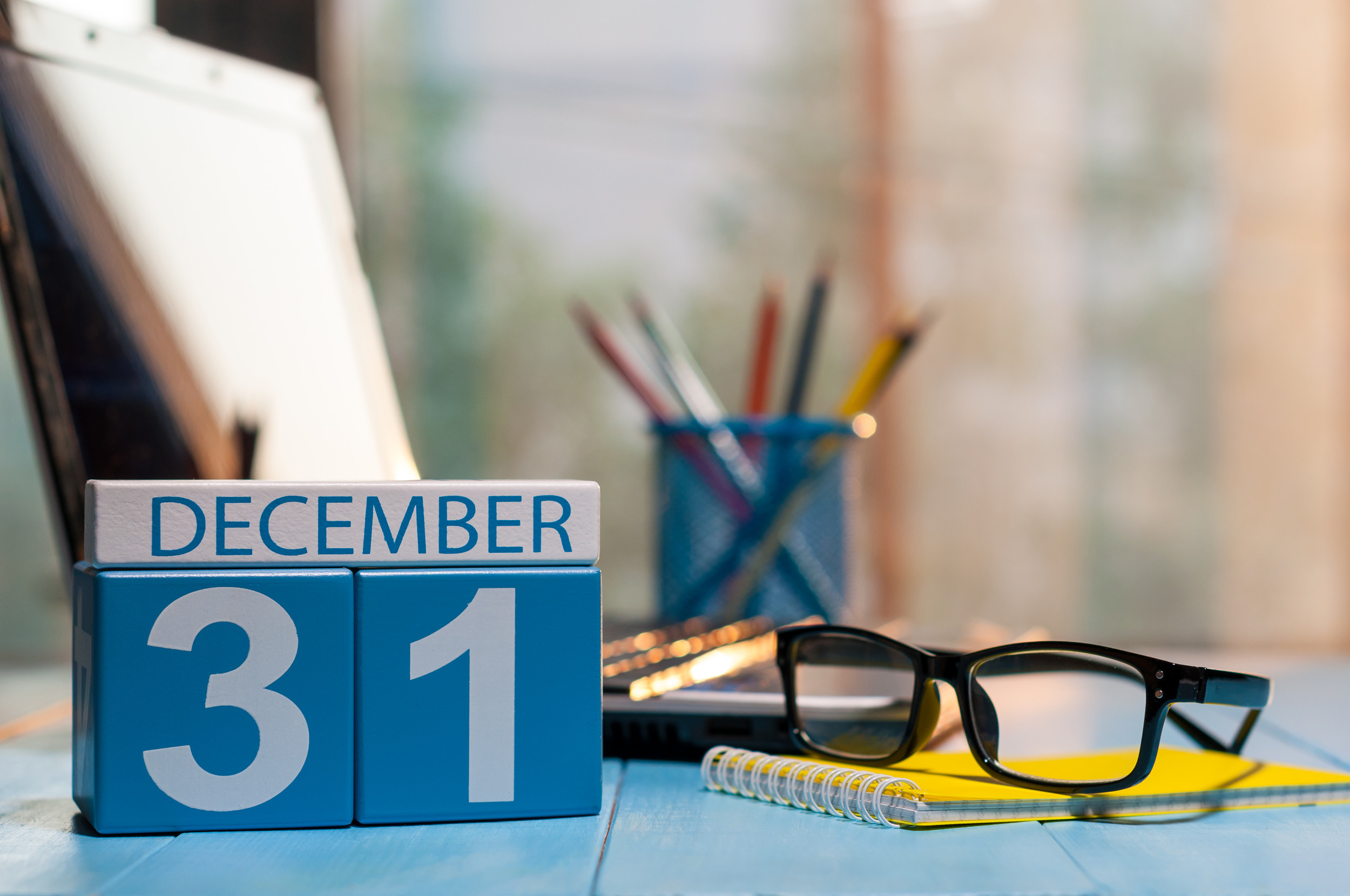 The end of the year is a time when many of us reflect on our annual goals. If you decided 2017 was the year you'd build rock-hard abs, for example, you might be glancing down to see if you achieved the washboard belly you were going for. If you wanted to lose 20 pounds, on the other hand, it's not too hard to hop on the scale to see how that went.

Of course, the same can be said for your financial goals. If you wanted to pay down debt, build up your emergency fund, or reach a financial milestone this year, you're approaching the moment of truth: Did you save up the emergency cash you wanted? Did you pay off that credit card balance? Did you boost your retirement savings, or grow your net worth?

Making an honest assessment of your financial progress is a smart move anytime, but especially as a new year approaches. These measures and others can tell you pretty objectively whether you made progress or not — and whether you have room to improve next year.

Still, financial advisors warn that there are certain end-of-year money moves you could absolutely regret making – or not making. Because, once the end of the year has come and gone, it's often too late for a do-over.

As the new year approaches, consider these dos and don'ts of year-end financial moves:

If you didn't bother signing up for your company's 401(k) plan, there's always next year. But if you wait and keep putting it off, you're leaving real money on the table.

"Your contributions are tax-deductible, and if your employer is giving you a match, it's free money," says financial advisor Mitchell Bloom, author of The 8 Biggest 401(k) Rollover Mistakes and How to Avoid Them. "Your account will grow tax-deferred and, if you feel like you can't afford the contributions, think again because you can't afford not to contribute."

If you can squeak out part of this year's employer match, you might as well sign up now to get a tax-advantaged raise, says Indiana Financial Advisor Tom Diem.

"The percentage of companies that match what you contribute to your 401(k) is on the rebound," says Diem. "If your plan is a dollar-for-dollar match, this could mean an additional pay increase and with no current federal income tax on the employer's matching contribution to your 401(k) account."

Further, the end of the year is often a good time to sign up for your 401(k) anyway. If you're getting a raise at the beginning of the new year, you may be able to start contributing to your 401(k) account now without noticing any difference in your take-home pay.

The Bitcoin craze and the ongoing surge of the stock market may be forcing you to rethink your asset allocation and overall investment strategy. However, you shouldn't change course based solely on what other people are doing, says San Diego-based financial advisor Taylor Schulte, host of the podcast Stay Wealthy San Diego.

If your financial goals or financial plan haven't changed, your portfolio shouldn't change, either, says Schulte.

"Just because it's the end of the year, or because the market feels overvalued, or because someone on television said 2018 is going to be a bad year in the stock market, does not mean you should make a change to your investments," he says. "Reacting to short-term noise and things outside of your control could cost you hundreds of thousands of dollars in the long run."

Schulte says that, instead of reacting to outside forces, you should review your portfolio, confirm that it still matches up with your financial plan and risk profile, and rebalance if it hasn't been done in the last 12 months. Then, block out all the noise and spend the holidays enjoying time with your family.

DO: Plan for Year-End Spending

Most people have likely done the bulk of their holiday shopping already, but there's still time to rein things in. "Don't let the holidays deliver a huge credit card bill as your present," says Joseph Carbone, Jr., a financial advisor from Long Island.

The holidays are the most wonderful time of year, and they're also the most dangerous financially, notes Carbone. Between going out to eat and drinking for holiday parties and the urge to buy life-changing presents for your loved ones or kids, the temptation to overspend is everywhere.

Even if you've done plenty of holiday damage already, it's not too late to set a budget that you're comfortable with and stick to it. At the very least, see how much you've spent already and create a plan to spend less going forward.

DON'T: Forget to Contribute to an HSA

While it's true you can contribute to your Health Savings Account for the 2017 tax year through April 15th, it's still smart to prioritize your contributions ASAP.

We've written about HSA accounts before: These accounts are advantageous for almost anyone who qualifies for one. With an HSA account, you get tax savings when you contribute, your money grows tax-free, and then you can use it for qualified healthcare expenses later on in life. When it comes to smart saving and tax planning, it doesn't get any better than a triple tax break.

Minneapolis financial planner Morgan Ranstrom even suggests cutting back on holiday gifts to free up cash for your HSA.

"This year, instead of putting your holiday bonus into toys and treats, use the opportunity to invest in year-round peace of mind by building up your rainy-day fund or making a bulk contribution to your HSA," he says.

You can save quite a bit this year and every year, saving money on taxes all along. For 2017, individuals can stash away up to $3,400 in a Health Savings Account, while families can contribute up to $6,750. To qualify, however, you need to have a high-deductible health plan, with a deductible of at least $1,300 for individuals and $2,600 for families.

Financial advisor Tony Liddle of Prosper Wealth Management says he learned about FSA rules the hard way. After contributing to the Flexible Spending Account (FSA) offered through his first job for an entire year, he forgot all about it. By December, his account had over $1,000 in it, but it was only then that he realized he had to spend this money or lose it forever.

That's the opposite of how an HSA account works, he says, since Health Savings Accounts belong to the owner and roll over year after year.

While some employers offer an extension to let you use your FSA funds or let you roll over the balance, Liddle's employer offered neither of those options. So, in a matter of two weeks, Liddle tracked down all his co-pay receipts from the doctor for reimbursement. He also spent hundreds of dollars buying approved medical supplies at Walgreens.

If you have an FSA account, Liddle suggests making sure to spend it down, gathering this year's receipts to get reimbursed, or figuring out what you can and can't roll over. If you fail to do so, your money can disappear in an instant.

The end of the year is an ideal time to be thankful for what you have – and to share your bounty with others. Fortunately, there are tax benefits that come with charitable giving provided you itemize your taxes and meet other requirements.

To make the most of your charitable donations, it's crucial to get everything on the table now – before it's too late, says Texas financial advisor Matt Adams of MoneyMethods.com.

"Before the end of the year, make sure you take time to assess where you're at with your charitable giving of cash and non-cash items," says Adams. "If you fail to get it done in time, you'll have to wait another year to get the tax deduction."

DO: Create Goals for the New Year

If you're frustrated you didn't reach your goals this year, it's important to remember that life happens. It's never too late to create a new list of goals for the new year, along with a plan to reach them.

We've all heard the saying, "When you fail to plan, you plan to fail." By creating a plan for next year, you can give yourself a real shot at working toward goals that will improve your finances.

Will 2018 be your year to get ahead? You'll never know unless you try.

Holly Johnson is an award-winning personal finance writer and the author of Zero Down Your Debt. Johnson shares her obsession with frugality, budgeting, and travel at ClubThrifty.com.

This article was written by Holly Johnson from The Simple Dollar and was legally licensed through the NewsCred publisher network. Please direct all licensing questions to legal@newscred.com.